Why are Western banking and financial officials and regulators playing into bin LadenÆs hands?
- Dr. Rachel Ehrenfeld & Alyssa A. Lappen in Human Events 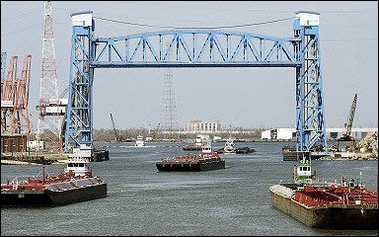 (a maritime company controlled by the UAE government) acquisition of Peninsular and Oriental Steam Navigation Company (P&O)[1] and their subsequent control of 24 terminals at six major U.S. ports broke from the Committee on Foreign Investment in the United States, a firestorm of controversy broke nationally. The detractorÆs response was attacked[2] as ôxenophobic hysteria,ö bigotry, and racism against Arabs (snarl words usually employed by the radical left against their hapless targets), by free market proponents, yet the majority of Americans, their sons and daughter at war with Islamic terrorism, instinctively sensed a threat. Few were able to clearly articulate why.

That threat no longer remains veiled. David J. Jonsson, author of ôThe Clash of Ideologies û The Making of the Christian and Islamic Worldsö has thoroughly and meticulously exposed the threat in his newest work, ôISLAMIC ECONOMICS AND THE FINAL JIHAD - The Muslim Brotherhood to the Leftist/Marxist - Islamist Alliance.ö[3]

Mr. Jonsson once again draws on over three decades of experience dealing with the Islamic world, working for major corporations in the United States and Japan and with multilateral agencies that brought him to more that fifteen countries with significant or majority populations who are Muslim. These exposures provided insight into the basic tenants of Islam as a political, economic and religious system, and became proficient in Islamic law (Shariah) through contract negotiation and personal encounter. In this book, he clarifies the totalitarian religious/political/economic ideology of Islam, and the growing Marxist/Leftist and Islamist threat against the West. 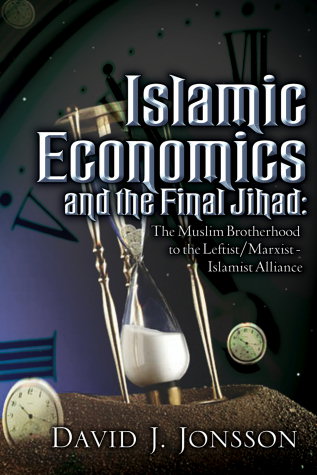 As a reviewer of this great book, I will assume that the reader has come to the understanding, like many other Americans, that Islam is not a religion as the Western mind understands religion, but also an economic and totalitarian political system with a religious aspect, much like Communism. Mr. Jonsson states, ôAs a complete ôway of life,ö Islam covers the entire spectrum of human activities. Islam means total commitment and subordination of all aspects of life to Allah. Hence, Islam is both religion and politics, church and state, joined in a single goal of serving Allah and implementing his commandments.ö

ôIslamÆs ultimate goal is the creation of æone world without borders under Islamic rule,Æ a totalitarian economic political theocracy based on Islamic lawùShariah lawà. Shariah law is the key to understanding Islamic ideology, government, economics, and social institutions. It is the basis for Islamic fundamentalismÆs disagreement with Western thought, and it encapsulates the ideology of Islam that is found in the QurÆan and the Sunnah. Shariah brings Islamic theology down to a personÆs everyday life. The objective of Islamic ideology is to have everyone in the world governed by Shariah law. Muslims believe this law expresses the universal will of Allah for humankind. They think they have a holy obligation to impose it upon all the nations of the world.ö[4]

Mr. JonssonÆs efforts in his latest work are extensive. Along with detailing the fact that Islam is not so much a religion, but a total way of life, he also exposes the burgeoning alliance between global Marxism/Leftism and expansionist Islam:

ôWe hope that this book will encourage the reader to learn more about the history and strategy of the Islamists and the Leftist/Marxist - Islamist Alliance leading to the events occurring today. The decisions you make in your daily life will impact the future of your life, that of your childrenÆs, and ultimately, that of Western civilization....ö

ôàThe goal remains the sameùworld domination. The added impact is the joining of Leftist/Marxist agenda to promote their ideologies with the Islamic movement. The global Leftist/Marxist - Islamist Alliance, which has now become the dominant political and social force around the world, had its recent resurgence in the mid-1980s. The alliance has grown exponentially, dwarfing all other political and social movements around the globe. Hardly a week goes by that a new demonstration or march is not planned in some major city across the globe.ö[5]

Mr. Jonsson then painstakingly details the extensive political and economic activities over the decades of that still developing alliance, from South America, to Russia and China, to the Middle East. Economic organizations like the Organization of Oil Producing Countries û OPEC, the Organization of Islamic Conference - OIC and its banking arm, the Islamic Development Bank û IDB, the Shanghai Cooperation Organization û SCO, to Mercosur - Southern Common Market, and Petrosur, are all explored.

Mr. Jonsson writes, ôàÆThe organization [SCO] now represents half of all humankind.Æ This was not merely a factual statement; rather, it was meant as a direct challenge to U.S. superiority. The military threat from the SCO becomes increasingly legitimate when we consider that even after ChinaÆs PeopleÆs Liberation Army (PLA) completes its current downsizing of 200,000 men, it will still have a standing army of approximately 2.3 million men with another 10 million men available from its organized militia.

The United States cannot allow a China-Russia-Iran triad to monopolize Central Asia and the Middle East. If the SCO does mature as a competing body to the European Union and NATO, it could signify a dramatic shift in the current geo-strategic balance of power that currently favors Washington.ö[6]

What impacted me most was not so much what it said, but what it didnÆt say. No where was AmericaÆs sovereignty or national uniqueness emphasized, rather, a ôglobalization at any priceö implied throughout the publication. This blind charge forward by the U.S and the West is even now showing its end result, not only internationally, but nationally, as political and cultural elements hostile to American ideas are exploiting our ethically rudderless drive for the ôbottom lineö against us to try to undermine American interests and foreign policy.

Mr. JonssonÆs recent expose of the radical Left in AmericaÆs alliance with Jihadi terrorist elements, in ôWakeup America û Understanding The Mindset Of The Jihadiö[7a] posted on my site extensively details that dark partnership, in the context of the 27 January, 2007 anti-war protests which took place in Washington DC. The Democrat party, because of their blind hatred for the Bush Administration as well as a ôprogressiveö agenda which is nothing more than a morally ambiguous new age religion which demands mindless worship at the alter of multi-culturalism. This inability to make any values judgments at all û except against conservatives û has opened the door for them to become horribly compromised.

First, US Representative William Delahunt, who declined to take a stand on the æPendleton 8.ö[8] Turns out his daughter Kara Delahunt is a registered lobbyist for the Saudi Economic and Development Co., an investment firm that bills itself as ''a leader in Islamic investments," and says it only puts money in projects that adhere to Islamic law.[9]

Then there is US Representative. John Conyers, new chairman of the House Judiciary Committee, who wants to reverse anti-terrorism legislation because, ôThe policies of the Bush administration have sent a wave of fear through our immigrant communities and targeted our Arab and Muslim neighbors.ö ConyersÆ district includes Dearborn, Michigan, nicknamed "Dearbornistan" and represents the largest Arab population in the country.[10]

Then there is recently elected, Minnesota Representative Keith Ellison, the first Muslim in Congress, whose supporters shout "Allahu Akbar!" at his acceptance speech,[11] recorded at YouTube.com. He also insisted on defying centuries of U.S. tradition by taking his oath of office with his hand on a copy of the Koran. While voicing soothing words of ôtoleranceö in the face of his detractors, ôKeith is paying respect not only to the founding fathers' belief in religious freedom but the Constitution itself," said Ellison spokesman Rick Jauert, it came to light the Koran was owned by Jefferson, not for the purported insight and wisdom, but to understand his enemies.[12]

All are Democrats and represent the ôleftö in the American political arena. All are affiliated with CAIR, a recognized radical Islamist group.[13] It is noteworthy Omar Ahmed, Chairman of the Board of CAIR (Council of American Islamic Relations), quoted from the San Ramon Valley Herald, July 1998, "Islam isn't in America to be equal to any other faith, but to become dominant. The Qur'an should be the highest authority in America, and Islam the only accepted religion on earth."

From author Cal Thomas[14], to terrorism expert and author Robert Spencer[15] people are talking increasingly about the rise of Islamic financing. Because, as the ôgolden ruleö states, he who has the gold, makes the rules. Finally, Jonsson gives solutions for resolving the vulnerability. ôTo change the game, a paradigm shift must occur:

ÀááThe United States, in particular, and the West must devise a strategic plan for energy self-sufficiency. This will entail a massive and expensive crash program for converting coal and natural gas to liquids, extracting liquids from shale, along with conservation measures.

ÀááThe banking system must refrain from chasing the profit for the Islamic market, neglecting the security implications.

À ááThe West must reduce its dependence on immigration to provide a safety net for retirement payments, market and low cost labor.

These actions will require a major shift in the attitudes of the population. This shift will be painful, but the option is to continue living in one of the three categories mentioned earlier: non-Muslims in the lands of war; non-Muslims in lands of temporary truce, or as dhimmis.ö[16]

Mr. JonssonÆs work in ôISLAMIC ECONOMICS AND THE FINAL JIHAD - The Muslim Brotherhood to the Leftist/Marxist - Islamist Alliance, likewise, goes well beyond national and international economics, delving into the extensive history of the Muslim world; into the very thinking of contemporary Islamists.

The financial aspects of the war are a subject that is rarely discussed in cultural and political forums, yet, Mr. Jonsson defines this ôwhite collar jihadö ôàMost of us are familiar with the term, ôwhite collar crime.ö We have seen the results of it in the rise and fall of major name corporations from Enron, Worldcom, and others. Few consider that while we are waging an all-out war against terrorism, Islamists seek to spread their ideologies through the control of the media, educational institutions including the textbooks, financial institutions and the control of natural resources. I refer to the leaders and workers performing these activities as performing ôwhite collar jihad.ö These workers are the ôstealthö army of Islamic jihad. They are the ôstealth sword of Islam.ö[17]

As the West continues to be hobbled by political correctness in winning this war against conservative, Wahhabi-type Islam, as well as the drive for globalization void of Judeo/Christian principles or values, we have only ourselves to blame for the ensuing guaranteed conflict as the idea that economic development and hollow Western materialism and consumerism fails miserably as a defense against the plague of radical Islam.

[3] Islamic Economics and the Final Jihad: The Muslim Brotherhood to the Leftist/Marxist - Islamist Alliance - http://www.amazon.com/exec/obidos/ASIN/1597819808/salemsmailbox

[8] Information on Mass Rep who failed to support the Pendleton 8 - http://www.freerepublic.com/focus/f-news/1670984/posts

[9] Congressman Delahunt's Daughter is a Registered Lobbyist for Saudis - http://www.jrtelegraph.com/2006/01/congressman_del.html

To return to Salem the Soldier's Homepage, the
"American Rewakening" series just click on the 'S'

All personal commentary articles copyright ® 1996-2007 Salem The Soldier's Homepage.
Full reprint with written permission only, except for the inclusion of brief
quotations in a review or article. This material is copyrighted to prevent
altering or reproducing for profit. Permission is granted to the reader to
forward all writings from "Salem the Soldier's Homepage/Michael A. Baker,"
without altering, to friends, groups or other ministries or to copy for similar
or personal use.