Have you wondered what the deal is with that DHS "right-wing"
threat analysis and what it means to you?


There's a lot of history behind
Uncle Sam's Short List!


[Noun 1. Short list - a list of people who are out of favor,
or a group or person being put on notice.]


DHS Secretary Janet Napolitano, squirming under the predictable pressure from the American Legion and veterans rights groups, the most prominent people added to the recent list, nevertheless said, "…Let me be very clear: we monitor the risks of violent extremism taking root here in the United States. We don't have the luxury of focusing our efforts on one group; we must protect the country from terrorism whether foreign or homegrown, and regardless of the ideology that motivates its violence."


This is singularly the most eloquent contemporary description of Uncle Sam's short list.


Sooner or later in this life, everybody has to be on Uncle Sam's short list!


That's when Martin Luther King and black militants of the Civil Rights era during the 60's found themselves on Uncle Sam's short list. 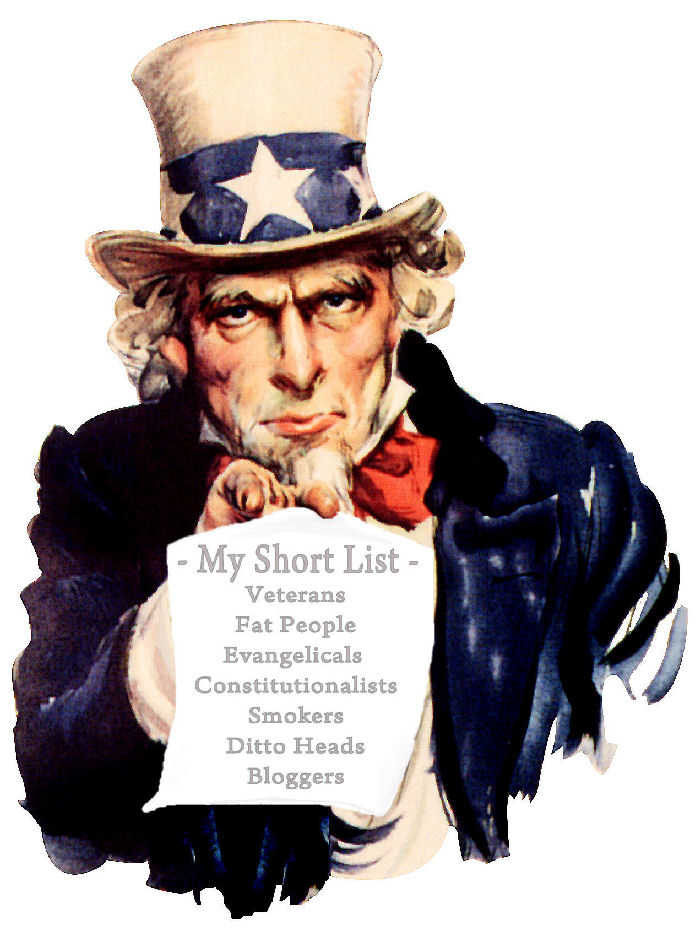 Later on, with the pre-Millennium release of the FBI threat analysis, "Megiddo Project," during the Clinton years, militia members, Conservatives, and white Christian males found themselves on Uncle Sam's short list.


In the Megiddo Project, even the adherents of an obscure cult called Odinism ended up on his list. How many followers do they have, a dozen? Even they ended up on Uncle Sam's short list for a while. Good for them!


Uncle Sam will get annoyed and kill a few people on his short list every once in a while just to show he's serious and can, when he thinks the late night talk show comics get to mocking him too seriously. David Koresh and the Branch Davidians being barbecued at Waco and Randy Weaver's wife getting blowed clean away at Ruby Ridge are good examples.


But unless a few people die high-profile, gruesome deaths from time to time, how shall Uncle Sam vouch for the integrity of his short list?


But then the Democrats were tossed out after that and Uncle Sam had to redo the short list. But that's okay! Uncle Sam is inclusive and a multiculturalist and never wants to leave anybody out as the arbitrary political winds blow back and forth.


Right after 9/11, a good friend and client, raised in America but from a Hindu/Indian background (dark-skinned Middle Eastern male in appearance), shared with me in detail one time he was accosted by the TSA mafia at LAX. A hysterical woman refused to board the same plane he was on, so they took him out of line and put him through a very thorough personal search right in front of everybody.


Tough for for him, with his permanent tan and all.


We laughed about it though, because we knew he was simply on Uncle Sam's short list!

Uncle Sam's short list is ostensibly to catch "extremists," depending on who is defining the very ambiguous term, and Uncle Sam has bagged a few real bad guys over the years. That's good! But everybody knows the short list is also many times about making big money, or strengthening your political status, whatever the context you find yourself in.


Uncle Sam's short list is good for the economy and fund-raising. I'm sure Morris Dees of the Southern Poverty Law Center is real happy "right-wing" Conservatives are back on top of the short list after the recent ouster of the Republicans. With Bush in power the last eight years and no backing for demonizing his particular ideological opponents, I'm sure the money largely dried up.


But with his organization's input on this DHS threat analysis, Dees is back on top. Time to put on more staff and start the fund-raising anew! The right-wingers are back on top of the list! Ka-ching!

On the other end, when President Obama made his crack against talk show host Rush Limbaugh, "Ditto heads" found themselves on Uncle Sam's short list. Which made Rush real happy, because it guaranteed his Conservative radio dominance and huge ratings, at least till the end of the Obama administration.


Jesse Jackson and Al Sharpton are still milking their affiliations with now deceased short-lister Martin Luther King and cashing in! If Uncle Sam quit carrying around his short list and just followed the Constitution and Bill of Rights, grievance groups, professional race hustlers, and assorted rights organizations would all be out of business. There has to be, what, 2,890,652,276 of them operating right now?


Forget the Fed and the banks, that would really put the American economy under! Where would these people get real jobs?


Even rich people are on Uncle Sam's short list. With the Bush led bank bail outs, and the corresponding economic meltdown, bankers, CEOs, hedge fund managers—all on the short list! How is that for equality?

Smokers have been on Uncle Sam's short list for a while, although never as high on the list. You shouldn't feel left out, though, because now fat people are going to be added to Uncle Sam's short list. Uncle Sam says smokers and fat people cost HMO's too much money. If your butt is too wide (size parameters are even now being hammered out by the Surgeon General), you get added to the list, which should cover an even larger majority of Americans. That's a huge achievement!


Hence as we have seen, everybody gets to be on the list as their political/religious beliefs, habits, skin color, and pants size warrant.


One day recently, Uncle Sam woke up and came to the realization he had lost his monopoly on information. The unwashed, uneducated peons he rules over found out what they could do with cheap publishing software and the alternative media. Boy, was he mad! Now, when Uncle Sam and his well-connected friends are looting the Treasury or lying about it on CNN, millions are standing up and shouting, "Hey, you! Stop that stealing!"


Oh, bloggers are now so on his short list! And that’s why Uncle Sam wants to regulate the Internet.


I am on Uncle Sam's short list. A multiple offender, in fact!


So, if you wake up one day soon and find yourself on Uncle Sam's short list, don't fret about it. It's like getting that jury duty summons in the mail, or paying your quarterly taxes, and now an integral part of being a real American and socially responsible.


And don't worry about references to George Orwell's "1984" and the rise of "Big Brother." It's not like that. That model of integrity and paragon of objective truth Senator Ted Kennedy has said that will never happen here in America.


Everybody—everybody, has to be on Uncle Sam's short list!


Is America a great country or what?

To Return to Salem's U.S. Government Page, just click on the 'S'!

"Are You On Uncle Sam's Short List?" © 1999-2009   Michael A. Baker.
Full reprint with written permission only, except for the inclusion of brief quotations in a review or article.
This material is copyrighted to prevent altering or reproducing for profit.
Permission is granted to the reader to forward all writings from
"Salem the Soldier's Homepage/Michael A. Baker,"  without altering, to friends,
groups or other ministries or to copy for similar or personal use.