The decades long deterioration of social mores and standards and the every increasing rancor of political discourse has had an inevitable result in America. The phenomenon and compilation of a myriad array of unfolding social and political trends was pristinely showcased in the accomplishment of the 2000 Presidential elections. Pundits of every stripe decried the "nation divided" and the "polarization" of American politics and society. Indeed, for those who watch closely the underground social milieu of political course and thought, this nation teeters closer than it ever has on the brink of civil war. Beneath the thin veneer of "normalcy" presented to American society by the mainstream press and broadcast media; the ruling elite; the roiling anger of the commonwealth threatened to reach perilous levels.


In the midst of this furious storm, the realm of professional law enforcement, especially represented in the Local LE agency, found themselves more than ever before increasingly isolated and pressed in to the corner. An exclusive class of people bearing the complex and intricate task of pure objectivity and impartiality in the execution of their duties, they were, and still are, under extreme attack, from all quarters.


From the extremist Liberal left, those proponents of big government ideologies, unconstitutional usurpations of Federal power, and the subjugation of the individual’s freedoms and God given rights to the "state," this political order carries on a protracted campaign to attack, discredit, and demonize, the Local LE agency in their bid to undermine the public’s trust in local law enforcement control, thereby justifying their demands for Federal intervention and oversight.


Then from within the realm of the right-wing, and further out on their perimeters, the fringe elements of this following engages in their own prolonged campaign against the cops--this from a "conservative" group who customarily is supportive of law enforcement and civilian society peacekeeping; yet really they are chaffing under the repercussions of their own apathy, complacency, and careless living. From engaging in the same demonizing and slander techniques utilized by their liberal left counterparts, they also have fallen into exploiting the LE community, whipping up people’s irrational fears and emotions against them. High profile LE events (orchestrated and inflamed by ratings mad media outlets and self-appointed community leaders of every stripe) are capitalized on to further their assorted varied arguments; ultimately employed to increase memberships, subscriptions, and financial gains for their respective organizations and "rights" groups. Especially concerning our Second Amendment rights. Prejudicial, biased, inflammatory speech and writing is everywhere and the order of the day. Simply irrational fear-mongering as the Conservative community falls blindly into the Liberal trap. But hey, it works. The end results and current status quo is evidence of that.


It’s easy to target the cops. Especially when it comes to politics. Especially when it comes to civilian gun ownership and the Second Amendment. Even though retired Police officer Leroy Pyle eloquently addressed the taboo subject of gun confiscation in his commentary, "Just Following Orders," in his plea to the 2nd Amendment community and the nation to not ignore the root causes of why we are where we are today, he was largely derided and ignored by his civilian listeners. Why? People would much rather "cling to their fears and preconceived notions like a life raft," as one officer put it. Indeed, the idea being unacceptable of losing the convenience of the law enforcement "whipping boy" to deflect the responsibility of our own actions to another. Even more, losing such a lucrative cash cow for the Second Amendment community a proposition too costly to entertain.


So the men and women of professional law enforcement are squarely caught right in the middle. Especially the vast majority of pro-Second Amendment cops, the majority in law enforcement, those who serve on the streets and daily see the bloody results of a disarmed society. The LE community stands in the middle of this "nation divided," to keep these two warring factions from achieving the inevitable result (or underlying motive?) of their respective campaigns: Killing each other.


It’s easy to demonize the cops. They stand in the valley and keep the bloodthirsty combatants apart. They stand in the middle of the Left and the Right and represent the authority of a father in the minds of teenagers who hate daddy because he is the authority in their lives and they are restrained by daddy's very existence. So their aggressors marginalize them, disparage them, ridicule, denigrate, and vilify them. It’s easier to "do things" to them when they are finally dehumanized and stripped of their human faces. It makes it that much easier to militate against them.


So who protects the protectors? Who stands in defense of them as mainstream society has all but abandoned them?


God protects the protectors, as they are His people and "ministers," per Romans 13. Guardian Angels watch over them from the unseen realms of life. Guardians watch over them from the sidelines on the streets, just out of peripheral view and notice. They protect the innocent, from within this society of warriors, and they are now on the record concerning their intents. One reasons with a notable Second Amendment organization’s leader....


They now walk unseen within regular society, nameless, faceless individuals who still "wear the badge," certainly, never able to take it off. Men of renown within these exclusive circles, meeting for the first time, and with a few words spoken to each other, a few titles passed back and forth, a few battlefields in obscure, far off places mentioned, and an immediate peer respect is established, men of honor and like mind falling silent for a moment as they remember. . . and know. . . and where the majority stands outside and wonders after them.

As government administrations change and opposing political parties continue the never ending bid to achieve and maintain control, the underlying root causes for America’s social turmoil continue to sour and flourish. That’s not professional law enforcement’s fault, as they are simply responding to the circumstances. Especially the men and women of professional LE who hold a Conservative viewpoint or come from a faith background. A myriad array of factors have to be considered on their part every day, as they adapt, improvise, and interact within this racially, socially, and politically charged nation, as well as their politically hamstrung departments. At this point, they don’t have the support of a vast majority of the civilian population, but are either targeted for attack by the militant fringe and largely ignored by the rest of society who takes their presence for granted.


Do they care what mainstream society or the militant factions think or perceive about them? To a point, but they don’t let the hostility from the society they are tasked to protect manipulate them. Over the last two decades the more bold and eloquent within the LE community have sought the support of the more moderate in American society, but received only slurs and hysterical bias and prejudice in response. The Articles page of the Second Amendment Police Department stands as a testimonial and defense of the best of the Constitutionally minded law enforcement community, those who hold sacred and dear their vows to defend and uphold Constitutional law and the Bill of Rights. The reader can take it or leave it. Now the LE community stands in defense of the "Brotherhood" as the innocent among them who are targeted for simply wearing the badge.


So, tonight, like so many other nights, a wife and mother, stands at the door and watches as her loved one leaves into the darkness and bows her head and prays, "Lord, please, watch over him. . . ." Nervously twirling the ring on her finger, she then places him squarely into the Hands of Providence and turns away.


Rest easy tonight, ma’am. Surely tonight He has a Guardian Angel security detail invisibly deployed around your loved one, to protect them from the evils which haunt the streets of this nation, a powerful, turbulent nation continually teetering on the precipice of war with itself.

Your loved one is also protected by another Guardian, an invisible individual who boasts the membership within an unseen society of warriors. And as a warrior, he knows his weapons. 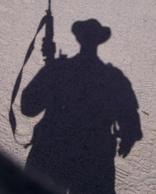 He probably carries a Walther PPKS with half-jacketed hollow points, or a 1911 Colt Commander with 230 Gr. Full Metal Jacket Ball ammo (absolute feed reliability proven under fire every time) and a standard supply of extra ammunition, 8 round Randall mags (1 spare), tucked away in a Bianchi International shoulder rig or concealed Yaqui belt slide holster. He carries an active duty or retired badge in his pocket, and the ghosts in his mind of the specter of war in strange lands; the experiences of walking and patrolling the same streets and decayed underworld your loved one does tonight or today.


He fears not in the face of the Angel of Death, having known him intimately, beating him many times. And he will bring his weapons to bear if need be again, putting down any cowardly murderer who would ambush an officer, any frightened wanna-be with deluded visions of "patriotic" glory, who, wanting to initiate the next civil or racial war, couldn’t meet the man face to face.


Your loved one sees him every once in a while, standing off in his peripheral vision, a ghost of a vision, a tall individual, who is there for a moment, and then gone. When there is momentary contact, he walks with a familiar self-assurance, a comfort and ease in the presence of your loved one, addressing them as "son" or "young lady," than moving on. He is in that obscure car that slows for a minute as that combative subject is taken into custody, stopping for just a moment, observing the suspect’s body language; the stance and demeanor of the officer, than quickly moving on. Your loved catches site of him as the suspect is being placed in the car. Off in the shadows, unobtrusive, silent, and noble, but still ready and willing to defend another who also wears the badge.


Is that ghost of a figure a real angel, walking among the temporal realm? Or is it a Guardian of another sort, an old man with steady hands; steady nerves; with the wisdom of years and the knowledge of the streets and times we live in, who is still ready and able to stand in the gap should need be?


Rest easy tonight, ma’am, because his identity isn’t important. Your loved one walks in the ample company of rough, fierce, and valorous men who watch out for their own when no one else will. Men of distinction and prestige who defend with extreme prejudice the integrity and honor of the institution of Police work in America today.


We just know them as a Guardian.

Click Here To Return To Salem The Soldier's COPS Page!

"The Guardian" Copyright © 2000 Michael A. Baker This material is copyrighted
to prevent reproduction or alteration for profit. Reprint with permission of the author only.